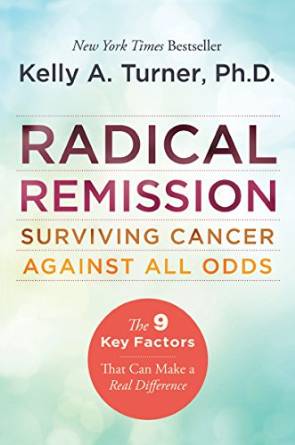 Every so often news arises in the media of someone cured of their cancer, or at least having a prolonged remission that wasn’t’ expected.

Recently a book called Radical Remission piqued my interest and it seems timely to share it with you.

Author Kelly A Turner worked as a psychologist in cancer and was interested in a case where a patient who was expected to die instead appeared to be cured.

She was surprised to find over a thousand reported cases of radical remission in the literature and embarked on a project to find the common theme. She contacted as many patients as she could and presented them with a questionnaire. She also personally interviewed more than 100 patients.

At the end of her project she found nine things these patients had in common:

All great things, and worth talking about with our patients. However, some comments first.

I regularly recommend people make lifestyle changes to improve their outcomes, whether that is to increase the cure rate of ‘curative treatment’ or to improve quality and maybe the quantity of life in cancer considered incurable. However, care must be taken not to create a burden for someone who may only have a short period to live.

So it is delicate ground; making those changes needs to come from a deep personal motivation and the nature of the radical change will be different for each individual.

In 10 years of working with patients who have cancer, I see many who do better than expected.

From the literature, we know survival is a bell-shaped curve, prognosis is always an average with a wide variation. For most cancers a small number of patients do very much better than average with and without chemotherapy.

I thought I would take the opportunity at this point to remind us of potentially radical changes we can make before we get cancer to significantly reduce that chance. A recent study reported data from two large health studies involving over 123,000 people over 30 years. This study identified that if five healthy habits were followed, the risk of cancer was reduced by 65 percent.

and hopefully, we can avoid these difficult conversations in the future.